A warm welcome to the bill gates leadership style section of the web site.

Bill Gates was born in 1955. He had a love of computers and began programming mainframe computers when he was 13 years old.

He developed his own version of the BASIC programming language while attending Harvard University. He started Microsoft as a partnership with his childhood friend Paul Allen. Microsoft became an incorporated company in 1981. 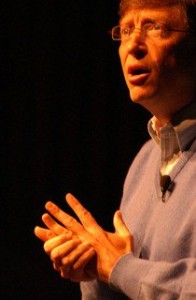 Gates envisioned the scale of personal computer usage across the world. He expected computing power to become cheap. As a result of this, he also expected that most people would be able to afford a computer. Ultimately he was right and he built a software industry to support this growth. His efforts resulted in him being one of the richest people on the planet.

Bill Gates is highly regarded in the business world often ranking in the top 10 of fortunes most admired business leaders. Up to the point of him retiring from Microsoft in 2008 Gates was known as a very demanding and slightly abrasive boss who encourages creativity and innovation and recognizes individual and team achievements.

Gates would request his employees to present and report out their ideas and findings to him on a regular basis. During these meetings he was known to regularly interrupt in order to question and challenge facts and assumptions.

It is unlikely that Gates would have been as successful as he was if he only ever adopted an authoritarian style. The authoritarian style tends to not be conducive to innovation as the controlling aspect of it hinders a follower’s ability to be creative.

Authoritarian leaders like to keep control. Gates required so much control that he even signed off the expenses of Steve Ballmer who was second in command!

This style of leadership is a very effective style for use in emergency situations or for where quick decisions are required. Much of Bill Gates’ success can be attributed to his quick decision making process.

Who Is Bill Gates?..

Hard Drive Bill Gates and the Making of the Microsoft Empire

Hard Drive: Bill Gates and the Making of the Microsoft Empire

Go From Bill Gates Leadership Style To The Home Page