A warm welcome to the procrastinate meaning section of the web site.

To procrastinate is basically to to put off or delay doing something or to put it another way…  Procrastination is knowing that a task must be performed, yet intentionally failing to motivate oneself to carry out the task within the desired time frame.

Procrastination is said to affect almost everyone to some degree or another. However it is more likely to occur with individuals who are experiencing one or more of the following…

Not all people who procrastinate have a problem with it. Some people work better under pressure and procrastinate simply to add some pressure to the situation. Procrastination only becomes a major problem if you’re missing deadlines as a result. If your simply putting things off till the very last minute then from a  positive viewpoint you could actually say that your just an excellent judge of the time required to complete something! 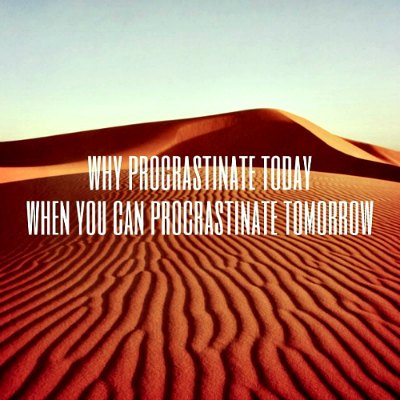 Procrastination is putting off plans that you had for yourself or putting off plans that someone else had for you. What procrastinators often do is replace the planned task with something that is immediately much more pleasurable or enjoyable. For example, you plan to vacuum and clean the house in the afternoon. It gets to the afternoon and what you actually do is flick the television on. Rather than clean the house you instead opt for an afternoon of daytime television! So you put off the cleaning until tomorrow. It gets more problematic if tomorrow you put it off again, and then perhaps again and again.

And then it gets more problematic still if the above example was replaced with something a little more important that cleaning the house, say an important report that your boss had requested. Miss the deadline and you end up with one very unhappy boss and of course if you repeatedly miss deadlines the your putting your career in serious jeopardy.

A Quote To Conclude

Go To How To Manage Time

Go From Procrastinate Meaning To The Home Page