“Never put off till tomorrow, what you can do the day after tomorrow.” -Mark Twain.

More follow below to either motivate you, inspire you or at the very least entertain you. So read though them, take note of ones that interest you and then get of your backside and start doing what you should be doing instead of reading a load of procrastination quotes!! 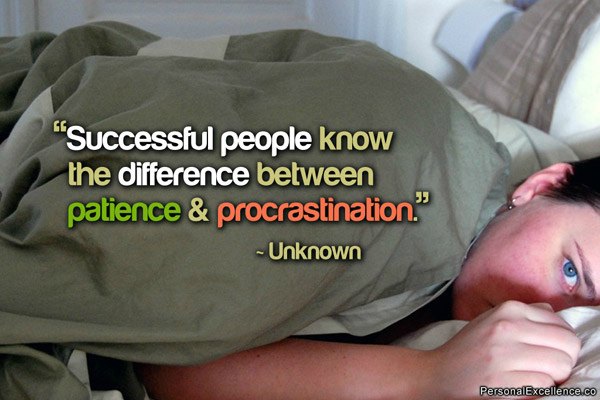 Stop breaking promises to yourself. Stop putting your goals to one side. Stop being a slacker! Stop watching telly or reading useless drivel and start work now on your most important goals!

Now for the Quotes About Procrastination…

“You can’t get much done in life if you only work on the days when you feel good.” -Jerry West (LA Lakers)

“Procrastination is the thief of time.” – Edward Young

“Anyone can do any amount of work providing it isn’t the work he is supposed to be doing at that moment.” – Robert Benchley

“There’s nothing wrong with procrastination. Or is there? I’ll leave it to you to decide, but only if you have the time.” – Craig Brown

“Yesterday is a cancelled cheque. Tomorrow is a promissory note. Today is the only cash you have, so spend it wisely.” – Kim Lyons

“Work is the greatest thing in the world, so we should always save some of it for tomorrow.” – Don Herold

“Even if you’re on the right track – you’ll get run over if you just sit there.” – Arthur Godfrey

“Don’t wait for your ‘ship to come in,’ and feel angry and cheated when it doesn’t. Get going with something small.” – Irene Kassorla

“Yes, you can be a dreamer and a doer too, if you will remove one word from your vocabulary: impossible.” – Robert Schuller

“If you wait until all the lights are ‘green’ before you leave home, you’ll never get started on your trip to the top.” – Zig Ziglar

“Procrastination is the art of keeping up with yesterday and avoiding today.” – Wayne Dyer

“I like work: it fascinates me. I can sit and look at it for hours.” – Jerome K. Jerome

“Putting off an easy thing makes it hard, and putting off a hard one makes it impossible.” -George H. Lornmer

“When there is a hill to climb, don’t think that waiting will make it smaller.” – Anonymous.

“Procrastination is like a credit card: it’s a lot of fun until you get the bill.” – Christopher Parker

“Much of the stress that people feel doesn’t come from having too much to do. It comes from not finishing what they started.” – David Allen

“If you want to make an easy job seem mighty hard, just keep putting off doing it.” – Olin Miller

“We shall never have more time. We have, and have always had, all the time there is. No object is served in waiting until next week or even until tomorrow. Keep going day in and day out. Concentrate on something useful. Having decided to achieve a task, achieve it at all costs.” – Arnold Bennett

“Procrastination is one of the most common and deadliest of diseases and its toll on success and happiness is heavy.” – Wayne Dyer

“The really happy people are those who have broken the chains of procrastination, those who find satisfaction in doing the job at hand. They’re full of eagerness, zest, productivity. You can be, too.” – Norman Vincent Peale

“You may delay, but time will not.” – Benjamin Franklin

“Do the hard jobs first. The easy jobs will take care of themselves.” – Dale Carnegie.

“Following through is the only thing that separates dreamers from people that accomplish things.” – Gene Hayden

“Delay always breeds danger; and to protract a great design is often to ruin it.” – Miguel De Cervantes

“When you have to make a choice and don’t make it, that in itself is a choice.” – William James.

“Know the true value of time; snatch, seize, and enjoy every moment of it. No idleness; no laziness; no procrastination; never put off till tomorrow what you can do today.” – Lord Chesterfield.

“The best way to get something done is to begin” – anonymous

Go To What Does Procrastination Mean

Go From Quotes About Procrastination  To The Home Page